“Change is coming to transportation, whether we’re ready for it or not.”

Deloitte University Press stated that strongly in their report regarding Digital Age Transportation: The Future of Urban Mobility in 2012. In the same year, Grab Holdings Inc., formerly known as MyTeksi and GrabTaxi, a Singapore based transportation network company established with a vision to be “Southeast Asia’s largest mobile technology company that connects millions of consumers to millions of driver, merchants and businesses.” (Grab, 2019). And in 2014, Grab landed its business in Vietnam and Indonesia (Dragan 2018).

Grab expanded to Philippines, Singapore and Thailand in 2013 and in Vietnam and Indonesia in 2014. Then they started expanding as it launched GrabBike, GrabCar, GrabHitch and GrabExpress. By May 2014 GrabTaxi had 1.2 million and in June 2017 it had over one million drivers registered in the network and the app was downloaded on more than 45 million devices across Southeast Asia.

For over the past few years, Grab has been growing strong and becoming a generic term people use to call the transportation service via mobile app in South East Asia. The Grab app was launched in 2012 by its founder Anthony Tan after receiving USD 25,000 from Harvard Business school. The company first started as a location-sharing system, assigning taxis nearby commuters through its app. One year later, Grab expanded its business to the Philippines, Singapore and Thailand. Adapting and innovating based on market demands in different locations, GrabBike, GrabCar, GrabHitch and GrabExpress were launched. By June 2017, it had over one million drivers registered in the network and the app was downloaded on more than 45 million devices across Southeast Asia (Dragan 2018). It is often to hear  “Let’s me take Grab to the event”, “I need it immediately. Can you please Grab it over?” (meaning Can you use Grab delivery service to send it over?). Grab has become an important part among Vietnamese daily transportation and slowly we accept it as the cheaper alternative of Taxi and “Xe om”.

Vietnam late 1990s and early 2000s, motorcycle became popular. Riding service “xe om” – an informal word that Vietnamese use to refer to “motor-taxi” grew to be a crucial part . It is cheaper, faster and it could carry more goods loads compare to “xich lo”. “Xe om” is so popular for people to get from place to place without having their own vehicle or a mobile phone.  You could find “Xe om” at the intersection of the streets, the market, the park, the mall or could be at the street food stalls. All you need is agree with the rider about the fee and pay by cash. How simple! 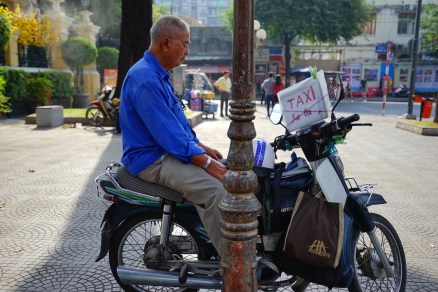 The only issue is you need to know how to bargain! Since there is no official price benchmark, the “xe om” rider could just tell you any amount of money comes to his mind. Besides, the safety issue is a major concern for young adults and women in the Asian countries A large amount of criminal news on national broadcast, radio, newspaper appearing non-stop could make everyone hesitate to sit on any transportation service except their own.

Coming from Harvard Business and strong Asian background, two Grab founders Anthony Tan and Tan Hooi Ling started Grab taxi to solve Asian transportation issues such as safety ride and better working conditions for all riders and drivers. Those are the reason why the goal and the core of Grab business apply well in Vietnamese riding culture and daily life. After 5 years running Grab service running in Vietnam, Grab has been widening their business to not only Grab Taxi but also Grab Bike, Grab Express (Delivery), Grab Food, Grab Express and Grab for Business as well as a partnership with local digital payments vendor, Moca.

The collaboration helped push Moca’s payments volume on Grab’s mobile app up by 150% in the first half of 2019, with monthly mobile active users increasing more than 70%, said Grab in a statement Wednesday (Yu, 2019).

Grab Food delivery service also reached a massive 400% climb in gross merchandise value in the first half of the year, ringing in 300,000 orders a day on average (Yu, 2019).

Based on its successful launched for the above services, Grab announced its plan for $500 million investment, which will go towards the introduction of new services and expansion of existing ones such as their main transport services and online payments. To span over five years, the funds injection will help the ride-sharing operator tap opportunities in technology, logistics, and local mobility (Yu, 2019).

Despite very good picture Grab showing us through their numbers, there are other local issues exist such as strong competitors on transportation services Go-Viet, Bee, Vato and also local delivery and online payment businesses. Consumer behaviour is also changing!

However, moving from a successful year in 2019, and reading from recent events above, I believed we sure hope to see a great growth of Grab Vietnam in the future.

Please leave a comment below to share your thought and any experience with Grab Vietnam or Grab services in other countries that you have.