Film – also called a movie, motion picture, or photoplay. Cinema is short for cinematography, covers the industry of films and filmmaking or to the art of filmmaking itself. Festival refers to a day or a period of celebration or anniversary. Therefore, a film festival should be a day or a period of celebration of films. However, is it this simple? Would this definition is enough to tell everything about ‘film festival’? What roles does ‘film festival’ play in national cinemas?

Cindy Hing-Yuk Wong stated that “Film Festivals attract widespread global attention as glittering showcases for films and people” (p.1). In Wong’s book, the Film Festivals, she discussed countless roles, missions, and goals of Film Festivals in the social and economical senses. And in fact, this book is the most comprehensive book about Film Festivals that I ever read (and you can tell by its title).

There are more and more to add to this list, but I guess the most important thing is the film festival supposes to be a strong connection between the place, the people, the culture and the artwork. Follow many successful film festivals in Cannes, Venice, Toronto, New York, Berlin, Hong Kong, Melbourne; film festival study attracts more scholars and researchers to conduct many depth pieces of research for further understanding. In corresponding to the film festival, many studies about related fields also increased such as social, political, cultural, economic, regional and international concepts. And Wong’s book is the result of excellent research work in Film Festival around the world, discussed from various aspects.

This year, we celebrate the fifth year of the Persian International Film Festival. Hence the Persian Film Festival will be held from 22nd September to 3rd October 2016 at four different locations in Australia: Sydney, Melbourne, Adelaide and Canberra, I will have chances to be more involve in various stages and process during that period. At the moment, I only help the Marketing Manager of Persian Film Festival on their Instagram account. Therefore, it is difficult to experience all of the major roles of Film Festival that listed above till the actual event happens.

“Founded in 2011, it is a one of a kind festival that showcases films by Persian-speaking filmmakers of Iran, Afghanistan, and Tajikistan, and through screenings, master classes and cultural events it celebrates this rich cinematic culture in and with Australian communities. The festival also aims to be a leader in shifting views and misconceptions in Australia by creating spaces for new and alternative voices of Persian-Australians and by being a forum for dialogue between and amongst diverse communities.” – Persian Film Festival Website

I suggest that in the coming few weeks when the Persian Film Festival starts in Melbourne, I will have more chances to collect information, photos, articles, reviews and researches for my further study about this event. This could be an amazing opportunity to practice my research skills, but also be challenging in gathering credible sources for my report 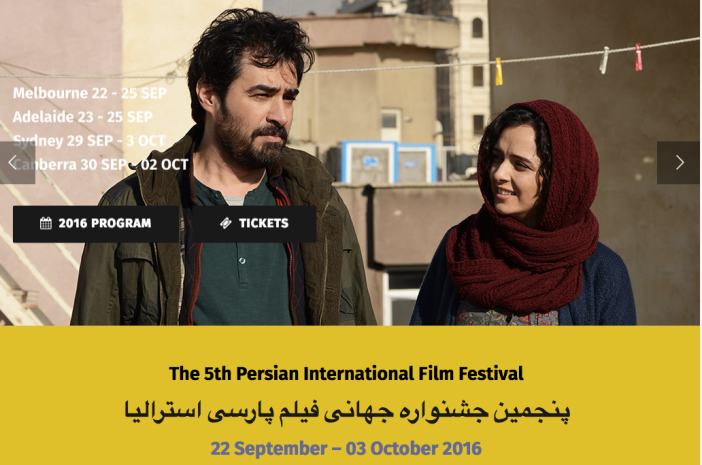 It might be great to list all the roles and aims of film festivals, and a showcase of all of the greatly rewarded films, nevertheless, I trust that we not only celebrate the works but also salute the people, the makers, and the audiences. The moment that everyone enjoys when the film festival happens. Everything looks good on theoretical paper, but I also hope that my blog posts and my report can reflect some experiences of the audiences and myself during the festival time. The Film Festival book is inspiring and provide many insights about Films and Film Festival. Nevertheless, I am still looking for more academic articles to study the Persian Film Festival and gain the best valuable experience through this event.

Have you ever experienced Persian Film Festival before? I am sure this will be a unique film event that worth to check out. Get your ticket today and share your thoughts below after attending this event.